Classicist Dr Michael Scott journeys to Athens to explore how drama first began. He discovers that from the very start it was about more than just entertainment – it was a reaction to real events, it was a driving force in history and it was deeply connected to Athenian democracy. In fact, the story of theatre is the story of Athens (http://www.bbc.co.uk/programmes/b039fpnk).

Classicist Dr Michael Scott looks at the dramatic decline of Athens and the remarkable triumph and transformation of theatre. During the 4th century BC Athens would lose its Empire, its influence and even its democracy. But theatre, that most Athenian of inventions, would thrive, spreading throughout the Greek world and beyond and giving rise to a new kind of comedy, one so popular and prevalent that it is still at the heart of our comedy today (http://www.bbc.co.uk/programmes/b039kr77).

Classicist Dr Michael Scott examines the vital role played by the Romans in the preservation of Greek drama and in the history of theatre. He explores how the Romans absorbed Greek theatre and adapted it to their own, very Roman, ends and looks at how this famous empire provides one of the crucial connections between our modern drama and the great plays of the ancient Greeks (http://www.bbc.co.uk/programmes/b039vj0v). 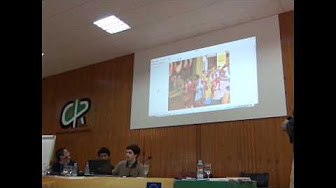 Herculaneum: A tour in Latin | Learn Latin | #59 via @YouTube